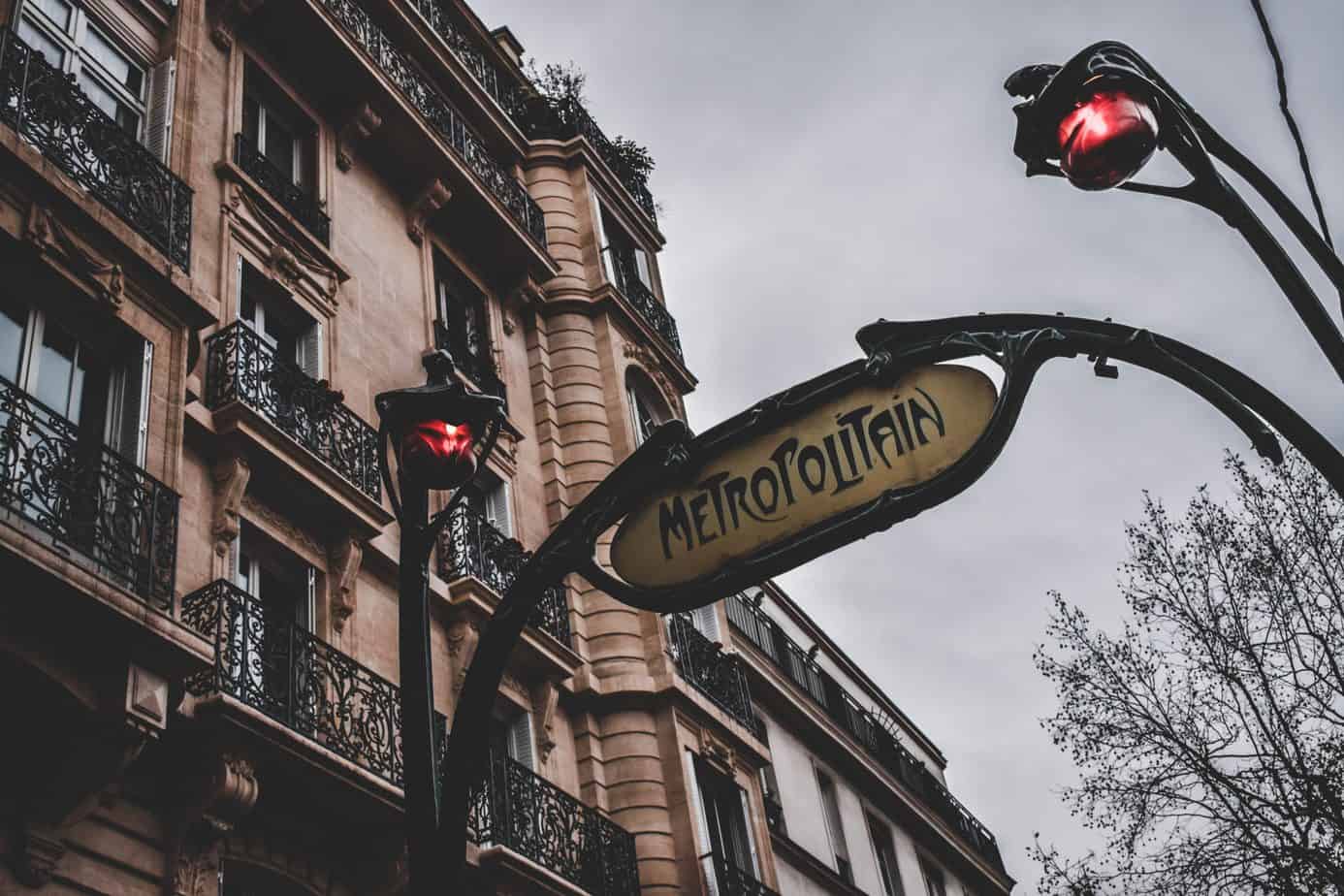 As in many capitals, the metro is an essential means of transport in Paris.
Did you know that more than 4 million people use it every day? In order not to get lost in the codes to adopt, we give you the essentials to know to take the metro like a local.

How does the metro work?

Types of trains to know

The national trains will serve cities other than Paris and the Paris region. For the Paris region (Paris and its suburbs (up to about 40 km), the RER and the metro are the preferred means of transport.

Metro tickets work just as well as for the RER, but beware! There are exceptions, depending on the areas served.

Subways and RER are identified by a number + colour for subways. And a letter + colour for RER.
When you read an RER or metro sign, you read the direction of the line to direct yourself. So, if I am at George V Station, and I want to go to “Argentina”, I get on the train towards La Défense.

Tickets you need to buy

Parisians use a Navigo pass. This is a card with a monthly subscription. For visitors staying a few days, there are three options:

If you are travelling with young people or children, there are discounted options. Think about it! (Students, under 25s and children).

When to use the Mobilis ticket?

This pass is interesting if you visit Paris or its suburbs for only one day or if you make a return trip between the suburbs (Versailles, Fontainebleau, etc.) and Paris.

When to use the Navigo Easy Pass?

You will have to pay 2€ for the card in addition to your travel passes. Nevertheless, this pass is interesting for families because it is not nominative, you can load it for the duration of your stay and not wait at the ticket offices. If you stay 3 days in the capital, this is the option to choose!

How do you recognise a Parisian: Parisians have Navigo passes… You can recognise them because they scan their handbags (put them at the bottom of the bag), their phones (which they put behind the shell) or their trouser pockets. Do the same to be a real Parisian!

When to use paper tickets t+?

Booklets of 10 tickets are for travellers who are travelling alone and for a short period OR for the last day of the stay, so as not to unnecessarily load the Navigo Easy Pass.

However, you should be aware that these tickets can be demagnetised… Put them away from your phone, key and other metallic or magnetic objects. If the ticket is demagnetised, it will not be read by the gates and you will have to exchange them at a ticket office.

Where do we buy tickets?

Staffed counters are becoming increasingly rare. The best thing to do is to take them at the machine. But be careful!

Means of payment: credit cards work but are sometimes capricious, especially with American cards like Amex. It is better to have a Visa & Mastercard on you when possible. Not all ATMs have change modules either… They are becoming increasingly rare.

Rule 1: Know how to stand or sit

There are folding seats on the door side. These seats can only be used when the metro is relatively empty, i.e. by sitting in them you do not disturb the people who want to get out.

If you are unfortunate enough to remain seated when the metro is crowded, you will be exposed to glares and rather unpleasant remarks. During rush hour, these folding seats are not allowed.

If you have a backpack, take it off or put it in front of you so that when you turn around you don’t bump into anyone. Full backpacks take up space and the carriers can’t see behind them and bump into people, which is extremely unpleasant for the neighbours.

Also if you have a stroller, you may have to fold it up to make room for people.

And during rush hour, offer your seat to the ones who need it more!
Offering a seat to an elderly person or a child is always appreciated, especially when the parent is alone.

Rule 4: Look at people and smile

If you meet a Parisian’s eyes, there is a 50/50 chance that he or she will turn away from you, out of modesty and fear of not being the recipient of your gaze. Accept the look and smile, you will see that they will return the favour. On the other hand, don’t stare at someone for too long… It would be rude even if you are staring into space!

Parisians are used to the metro and are jaded. The French have an adage: “Métro, boulot, dodo”, a routine that can be translated by “metro, sleep, work”.

You will see them reading, playing on the phone, listening to music but very rarely talking. If the French are in groups, they speak at low volume, as a way of respecting others.

Rule 6: Know how to assert yourself in rush hour

Peak times vary, but most commonly between 8am and 10am and between 4pm and 7.30pm. When the doors open, and the metro seems to be full, it is customary to push and say “Excuse Me”. This should only be done if you are in a hurry and not travelling with children.

Otherwise, wait for the next train, they arrive every 2 to 5 minutes.

Rule 7: Do not eat in the metro

Parisians never eat in the metro. You can, but the place doesn’t really lend itself to it and frankly, it’s not cultural at all. Plus, with the bouquet of aromas wafting through the tunnels, it’s not exactly the most appetising environment to eat in.

Rule 8: Walk rather than change too many metro lines

The more metros there are in a station, the longer the connection is likely to be. It’s better to walk a bit when getting out of the metro, than to change trains more than twice!

Rule 9: Pretend you know where you are going

Know where you are changing trains and where you are going before you get off, to avoid that moment of lost panic that will signal to pickpockets that you are, in fact, not a local.

Rule 10: Stations to avoid and to favour

There are stations that you avoid, and those that you love…Travel Paris like a Parisian and if you don’t…Well, you’ll understand your mistake!

Rule 11: Not an obligation to tip street artists

Artists are allowed to perform in some metros, but this is not allowed on the metro trains. When an artist gets on board singing an Edith Piaf song or playing the accordion, it is not an obligation to give money, unless you feel the urge to do so.

Love it or hate it, the Parisian metro the fastest and cheapest way to get around Paris!