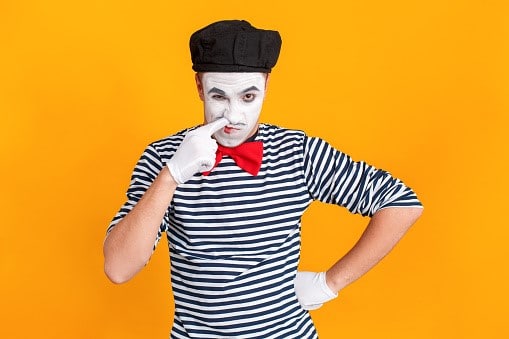 No, french people do not smell…Not worse than anywhere else anyway!

Where does this cliché come from then? Well, it goes back a long way…

First of all, From the royalty era, especially during the time of Louis XIV, named the “King Poo”, because he smelled pretty bad, just like the rest of his followers. To mask his smell, he used to perfume himself excessively. and this is also true for the ladies of the time. At that time, fashion made it very complicated to undress, and thus, it was customary for the ladies of the court, to walk in the Gardens, to squat and smell a flower and to pee on themeselves… to mask the smell, a blow of perfume and “hop ” ! One is clean…

The second element of explanation is the second world war. It is our American friends who cut us this reputation. Under the German occupation, we lacked everything and especially soap.
This was misunderstood or misappropriated, leading American to think french people smelled because they didn’t wash.

A cartoon also helped to convey this reputation. For the older generation, those who knew the Looney Tunes, there is a character called “Pépé le Putois”. He is French in the cartoon, and regularly puts perfume on himself… See the connection?

Finally, the English this time help us to maintain this so valorizing cliché, with an expression which is called “The French Shower” and which consists… to be perfumed with deodorant or perfume to avoid washing.

So, no, the French don’t smell bad…On the contrary, considering the ton of perfume we spray ourselves with 🙂

On the other hand, a study says that we use 2 times less soap than our European cousins…I’ll leave you with this!