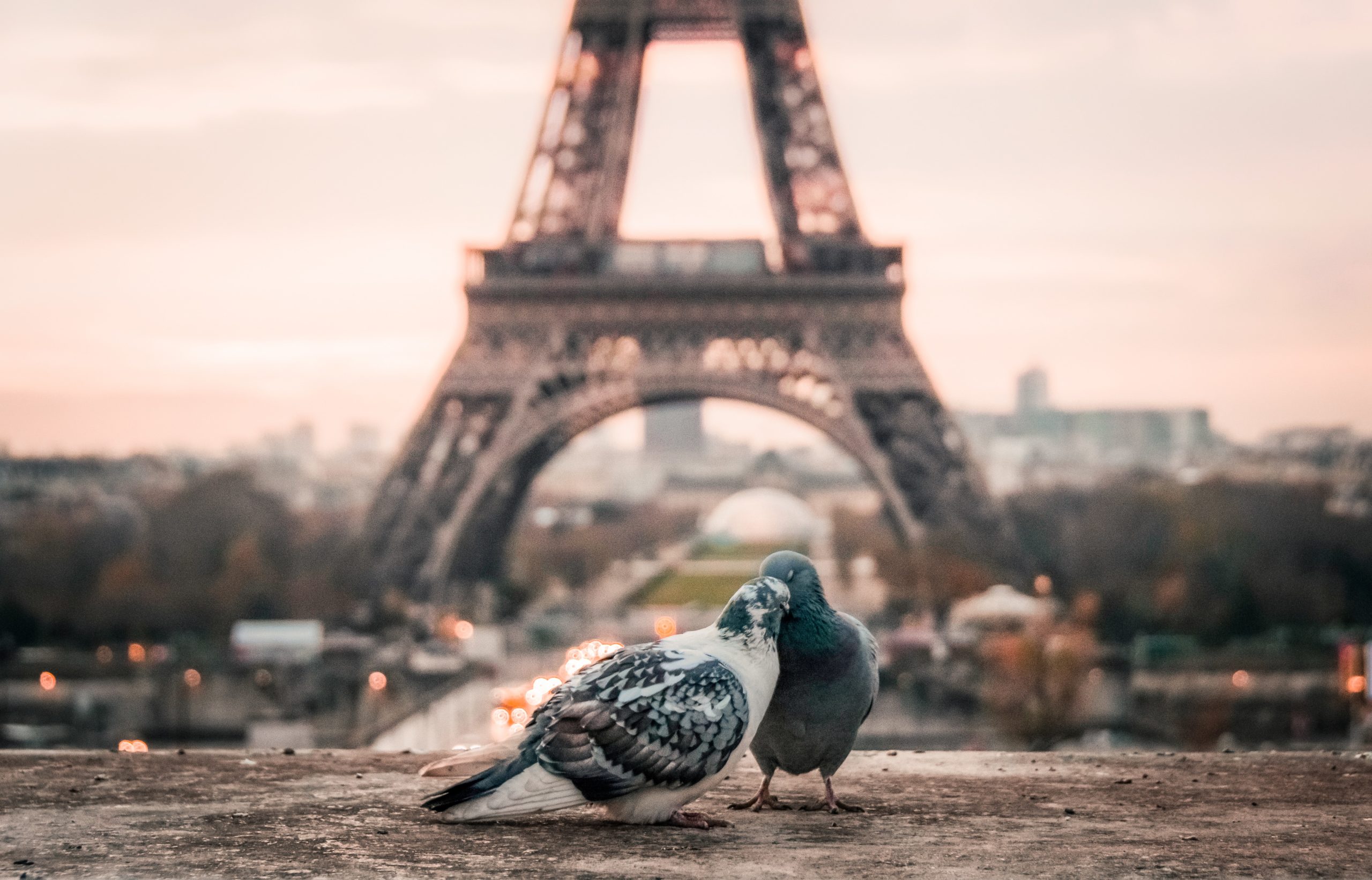 I am French and I became passionate about travelling when I turned 18. With each new encounter, I hear the same thing: “Oh, you come from Paris?! The city of love! …”. Why and how did we obtain this international reputation, so dear to the hearts of foreigners who come to visit us in Paris? I have visited almost all capitals of Europe, and some of them have made more of an impression on me than Paris, such as Rome, Budapest or Prague. I admit that I have always lived in Paris … but still.

Whether you are French, Parisian, foreigner, on a business trip or there by chance, Paris remains one of the city that shapes the definition and imagination associated with romance and love.

So to do well and before writing this article, I took the time to do my research and walk around the city with a neutral view of my environment. And with one question in mind:

Why is Paris the city of love? Paris became the city of love during the 19th century, thanks to the Romantic movement, the famous poets and artists of the period. Later, with the increasingly frequent visits of foreigners to the capital of love, Paris’ fame was confirmed thanks to its architecture, cinema, gastronomy, paintings, cabarets, and picturesque districts such as the marshland, where penniless painters, writers and poets met in cafés and bistros to remake the world.

If you’re interested in knowing a little more about how (and why!) Paris became the city of romance, follow the following sections…I’ll take this opportunity to give you some good addresses or ideas during your visit on how to express your love 😉

I invite you to download the MAPSTR application and add our we.are.alfred account. We put all our addresses there. For those given below, select the category “Paris In Love”.

The artists and writers who made the romantic reputation of Paris

The literary beginnings of Parisian Romanticism

It was during the 19th century (Romanticism period) that French writers made the reputation of Paris.

The distinguished pen of our famous writers such as Alphonse de Lamartine, Victor Hugo, George Sand, Chateaubriand, Lamartine, Alexandre Dumas, Jean Cocteau, Honoré de Balzac, Charles Baudelaire, Alfred de Musset (and many others) sublimated the feeling of love and laid it down on paper in a melodious, passionate and melancholic way.

At that time, the bourgeoisie was fond of literary evenings. Texts were read in their original version, even to foreign populations. This is how the French language was exported to many European countries. And words such as “je t’aime”, “chéri”, “amour”, “Rendez-vous” or “Fiancée” entered the common vocabulary of our English-speaking neighbours.

Here are a few quotes to illustrate some of the jewels of the language of Love :

At one point in their careers, writers, poets and artists met as a rite of passage, in Parisian bars and cafés to talk about the world. Between the fumes of smoke and alcohol, they invited many of their peers such as Oscar Wilde, Scott Fitzgerald or Ernest Hémingway to their table. Over the years, Paris has become a Mecca for meetings, inspiration and creativity, nurturing its growing reputation as a city of light and romance.

Mythical Parisian places to visit for lovers of literature

If you wish to immerse yourself in the bohemian Paris of the 18/19/20th century, then you will have to visit the bistros and cafés that inspired lovers of this subtle art: The Language of Love.

Closerie des lilas (171, boulevard du Montparnasse, 75014): this place is first on the list for a good reason. It is legendary. It has seen great names parade through the decades. Thus, the walls of this café have seen regulars such as Emile Zola, Paul Cézanne, Théophile Gautier, Paul Verlaine, Guillaume Apollinaire, Ernest Hemingway, Scott Fitzgerald, Henry Miller, Oscar Wilde, Samuel Beckett and Jean Paul Sartre leaning against its bar.

Le Café de Flore (172, boulevard Saint-Germain, 75006): it is in the very beautiful district of St Germain des Prés that you can sit in this café, close to Jean-Paul Sartes and Simone de Beauvoir hearts, who used to come penniless to spend their day warm by the stove, for the modest price of a coffee. The place also welcomed Albert Camus, Boris Vian or Jacques Prévert. And many other thinkers or philosophers who came here to take part in debates around existentialist or progressive ideologies.

Le Café de la Paix (5 Place de l’Opéra, 75009): located on Place de l’Opéra. It opened its doors in 1862. It is after the inauguration of the Opéra Garnier that its influence widened. Among its clientele of famous people, we once again see regulars such as Émile Zola, Guy de Maupassant, Oscar Wilde, Marcel Proust, André Gide and Ernest Hemingway.

Le Procope (13, rue Ancienne Comédie, 75006): this is one of the oldest cafés in Paris (1686), and its reputation precedes it. It is imperative to make a reservation to eat there. This café is known for the concentration of great thinkers who came to stay there from the 18th (the Age of Enlightenment – Voltaire, Diderot or Rousseau) to the 20th (we can mention Paul Verlaine, Victor Hugo, Alfred de Musset, or Honoré de Balzac). It is also in this café that you can find the last correspondence of Marie Antoinette. Or the original declaration of the human rights (on a parchment), that is to tell you her historical imprint! On the tables, you will see plaques engraved with the names of famous people who used to sit at tables. You will find contemporary names like Marc Lavoine, who continue to climb the already UP hill of this historic café.

La Rotonde (105, boulevard Montparnasse, 75006): La Rotonde is one of those Parisian cafés that made some painters migrate from the Montmartre district to the Montparnasse district. Later, it was illustrious regulars who continued to perpetuate its reputation. Among them were Guillaume Apollinaire, André Breton, Louis Aragon, Jacques Prévert, Hemingway and Raymond Queneau. It is an address that cannot be ignored when talking about artistic Paris!

If you love reading and want to immerse yourself in the French universe in the language of love, then here are some recommendations.

Since its beginnings, French or international 7th art has been interested in Paris. And it offers a romantic vision of the French capital.

French cinema made its entry into mainstream culture in the 1895s. At that time, films were only one minute long and showed mainly burlesque and silent scenes.

It is only from the 1915’s that French films began to gain momentum with feature films approaching 2 hours in length and focusing on the subject that most fascinates the human race: love. One of the first feature films, L’Enfant de Paris, for example, depicts the adventures of Le Bosco, an orphaned teenager who fell in love with a brotherly love for little Marie-Laure, taken from his rich family by an abominable thug.

France, at that time a pioneer in the field, will be one of the main contributors to films in the world. The First World War slowed down the development of French cinema, leaving the way open for Hollywood cinema to impose itself and export its vision of the world.

For American cinema, Paris is synonymous with elegance, romanticism, fashion and the French art of living. The mass distribution of its Hollywood productions featuring Paris at the heart of romantic intrigues will make its reputation as the Capital of Love in the eyes of foreign tourists.

To illustrate this, below are a few films that you can watch one evening as a couple over a glass of wine or by sharing an ice cream:

The most romantic corners, districts and monuments of Paris

In the collective imagination, Paris is :

And it is true that these moments of French life, although ordinary for us humble residents, are truly a source of romance when looked at more closely.

If you want to live these romantic experiences in your turn…here is my personal selection from all the possibilities that Paris has to offer. Perhaps you will be inspired to propose there, who knows? If so, send us a photo 😉.

Alfred’s Top 15 and romantic places to take the love of your life :

To dine (without breaking the bank!) in a romantic setting

Have a drink with your lover

It is the world-famous attractions and images that maintain the myth of our beloved capital. But what about the locals? What are the things we do or the places we frequent to seduce?

The romantic habits of the French

Romanticism is undeniably lost. But where there is a Frenchman, there is still hope. Faithful to our reputation, French men still hold some fragments of our culture. Here are the things that Parisian men do (still) to seduce us … Beware, it’s a cliché:

If I had to summarise how Paris became the city of love, I would say this: our culture of seduction (transmitted through the classic literary works of the 18th and 19th centuries), of impossible love (love intrigues in the French bourgeoisie of the Renaissance period), of admiration for women (sublimated and counted by the painters and poets of Montmartre), has always existed and is part of our DNA.

But finally, I understand from my research that it is through the prism of Hollywood films that our reputation comes to us and has been transmitted to the world. Without a foreign interpretation of what love is or romanticism pushed to the top of its art (as La France et Paris seems to be), we would not have this reputation. The criteria of romanticism have been shaped by Hollywood interpretation. And in this context, yes, Paris is a city with a strong romantic culture, that needs to be visited urgently with your second half.